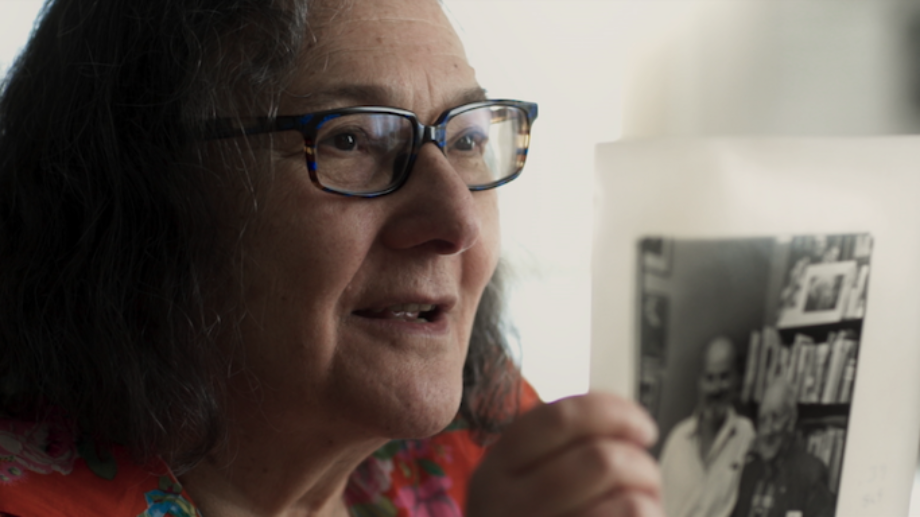 Elsa Dorfman has known Errol Morris for more than a quarter of a century, but when he proposed the idea of doing a film about her life’s passion, she thought he was joking. The result is The B-Side: Elsa Dorfman’s Portrait Photography, a charming and poignant documentary that finds Dorfman reflecting on the thousands of 20×24 Polaroid photos she’s taken throughout her career. When Dorfman recently sat down with us to talk about the film, she discussed her experience seeing it for the first time, her friendship with Errol, the value of her portraits, her blossoming creativity outside of New York City, and more. The B-Side is now playing at the Film Society of Lincoln Center.

With The B-Side, I had the overwhelming feeling that I got a sense of your whole life, but obviously there are so many more details that haven’t been filled in. I’m just curious your first reaction on seeing it for the first time.

In the film you say, “You can predict and predict about life, but life is really unpredictable.” I’m curious how that has affected the decisions you’ve made in life.

You have to be lucky. I don’t know; I mean I’m not surprised that my life worked out because I really worked hard at it. But on the other hand, I know how close it came to not working out. I think everybody’s like that. Like the bus almost hit you, but it didn’t hit you. I mean where you’re standing on the subway can matter. Whether you’re first or third in line can matter and now I think it’s worse than ever.

You talk about how you came to New York, but in terms of finding your true passion and what you love, it’s something that you found outside of New York. I feel like so many people come to New York, and they try to make something happen and perhaps it doesn’t and they could be somewhere else and find more creativity, more freedom. So I’m curious if you can talk about that fascinating moment in your life.

It is! It is fascinating! It’s even fascinating when it’s your life. [Laughs] And you barely understand it. And it’s also terrifying. And I don’t know how you make the decisions of what to do. Or when you realize the situation is not a good situation for you. I don’t know. I guess the biggest things that I would say are don’t become an alcoholic or a drug addict. And don’t get pregnant if you’re a girl. And is there another one? Can you think of another one?

I would say coming to New York there are so many distractions, whereas if you’re perhaps somewhere else where there’s a greater resource of time you can focus on something and your creativity can blossom.

You have to be so lucky and a certain amount of discipline. I knew when I was in New York that I couldn’t stay in New York. It was too much for me. Did I make the right decision? I don’t know, but here I am. It doesn’t seem bad, but I was tormented. Nowadays, I don’t think you can get from twenty to thirty without being tormented. Although I didn’t notice my son was tormented, but then maybe you don’t recognize it in your own children.

Your friendship with Errol is clear in the film, even if it’s not obvious. You can tell from the things he says there’s a genuine relationship there.

We were friends, and obviously I knew his work. And we all knew each other and we ate and did things together. And he liked my work. And so Errol says, “I’m going to make a movie.” Fine, Errol. You know how people say, “Oh, that’s a great story. I’m going to write that up.” When Errol called me and said, “I have a studio” in three days, I said, “What are you talking about?” We had never talked about a movie, what was going to be in the movie, why he wanted to do the movie, how he would do a movie, what I needed to do in the movie. Nothing. I had no idea. It is amazing to me now—no more preparation than you have prepared me for this interview. None. “I’ll meet you in this square room. And there will be a guy with a camera and a light and we are going to go and we’re gonna play this tonight.” Okay!

Is there anyone that you wish you photographed that you didn’t get a chance to?

See, I’m not the kind of person who focuses on what I wish happened. I’m more the kind of person who could tell you that I’m thrilled that I photographed. Like I love that I have so many photographs of Jonathan Richman, and I’m so glad that I have all of these pictures of Harvey and my kid, and I’ve done a lot of people who were dying and I always felt that that was almost like a sacrament. I’m glad that I had the opportunity to do this, to survive doing these portraits, because it was a lot of work and a lot of it was lonely. I’m glad I’m alive for all of this. Look at Diane Arbus—she died, and she was respected, but nothing like she is now. Look at all she missed out on.

When people came to take photos, were there ever people who wanted what would have been the “b-side”?

They wanted it for free and I wouldn’t give it to them for free. I have people now who write to me and say I’d like to buy it… and I’ll say that’ll be ten thousand dollars. I did have somebody recently who was wondering about a b-side. She and her husband had come with their two children, before they told the children the father was dying. Now the children are in their thirties and there are two children with their own families, but there’s only one original, so I have to look and see if I did do a b-side.

You say in the film how the pictures become more valuable over time because of the deterioration. Now that this format is not really being used, can you talk about how that adds to the rarity or value of the portraits?

Well, I’m still in awe of your generation being happy with film that you can’t hold in your hand. To me a photograph is something you hold in your hand and tack on your wall. I haven’t made the leap to the world of digital. I mean, I have a digital camera, but I never turn it on; I don’t know what to do with it when I have a picture. Where do I save it, what do I do? I can’t figure out anything on the Internet. I haven’t made that leap.

I certainly think that making art can bring people together. Look at music. I mean that’s what music is about, of course. I’m all for art projects and art programs, anything where you work together brings people together. I guess I would say to people, “Don’t be afraid. Jump in, but also be ready to jump out. Try to learn to be lucky.” I really think in photography you depend a lot on the vibes of people and sort of learning fast about what the people are like and what they need. It’s less evidence than like what Harvey [her husband, an attorney] does, which is all about the evidence. Art is much more intuitive so you have to trust your intuition. I feel great gratitude to all the people that helped me. And now I‘m at the point where more people who helped me are dead than at any other time. And so I have this feeling of not just gratitude, but recognition of how things turned out. I don’t know if I extracted any lessons. I’ll probably do the same things all over again, but you do try to knit it all together. I don’t know. I’ll be hit by a truck.