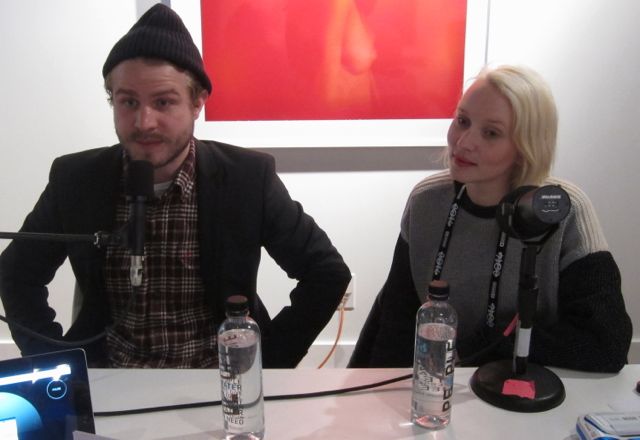 Listen to our seventh podcast from the 2014 Sundance Film Festival right here, or subscribe on iTunes!

Actor Brady Corbet and filmmaker Mona Fastvold stopped by The Daily Buzz to talk about their latest film, The Sleepwalker, currently playing at Sundance. Damien Chazelle, whose Opening Night film Whiplash sold in a seven-figure deal the first weekend in Park City, also join for Episode 7 from Main Street in Park City. Also in today's episode, NYC-based documentary filmmaker Sam Green shares with host Eugene Hernandez his latest “live documentary,” The Measure of All Things. Andrew Rossi discusses the exorbitant rise in tuition at the heart of his doc Ivory Tower and Film Society's Matt Bolish, who programs the Convergence program at the New York Film Festival, talks about Sundance's immersive storytelling component, New Frontier. And of course, Hot Topics makes its final visit from the festival which climaxes this coming weekend.

“I'm an only child from a single mother, and I came off of Simon Killer which is full of men and some meaningful female characters, but it was mostly machismo,” said The Sleepwalker star Brady Corbet to Daily Buzz. “So it was great to come on a project that had a great dose of femininity and grace.” The film centers on a young couple, Kaia and Andrew, who are renovating Kaia's secluded family estate. But their lives are violently disrupted after the unexpected arrival of her sister, Christine, and her fiancé, Ira.

“I think every character originates from the writers, but it takes on a completely different life once you start collaborating with the filmmaker and actor,” director Mona Fastvold told Daily Buzz about the film which is screening in Sundance's U.S. Competition. “I'm from a huge family of women. There's aggression, love, jealousy and care.”

Damien Chazelle's Whiplash made quite a splash at Sundance. It was one of the festival's four opening night films and it sold in the first weekend to Sony Pictures Classics, reportedly for $3 million. His short film of the same title won the Jury Prize at last year's Sundance Film Festival. ” I wanted to make a movie about the hardship, terror, pain in becoming a great musician,” Chazelle told Daily Buzz in Park City. “I was once a drummer myself and was very competitive. [There's] always this dilemma about whether it's worth it or not.”

The film centers on Andrew, a promising 19 year-old drummer at a cutthroat Manhattan music conservatory, but he has little interest in being just a musician. He's haunted by his father's failed writing career and fears failure may be genetic. He dreams of greatness and thus practices daily until his hands bleed. The pressure mounts as Andrew rejoins the school band led by a brutally savage music instructor. And under his instruction, Andrew pursues perfection at any cost. ” This was a personal story in which I dealt with memories of my own,” added Chazelle.

The Measure of All Things director Sam Green at Daily Buzz. Photo by Brian Brooks.

The Measure of All Things

Hailing from a documentary background, Sam Green morphs the non-fiction form into a live event in his Sundance New Frontier Films project The Measure of All Things. “One thing I like about this form too is that I change it in small ways each time,” said Green. “Wherever we are, I add something about that city. So that's great because it personalizes it.” Green's “live documentary” with a poetic meditation on humanity, is loosely inspired by the Guinness World Records book series. Green travels to various sites around the globe to collect original footage of record-holding people, places and things including the tallest man, the woman with the longest name, and the oldest living thing on the planet. He then weaves together archival footage, his own live narration and an evocative soundtrack to portray the nature of existence on earth.

Added Green in Daily Buzz: ” I love the idea of a cinematic experience still and in order to experience it you have to see it live.”

The U.S. Documentary Competition film Ivory Tower questions the logic of higher education during a time when the cost of university has increased more than any other service in the U.S. economy since 1978. Student loans over the next ten years will cost $184 billion, even as many college graduates struggle to find menial employment. “It's about whether it's still worth the cost and more importantly about how there's a cost disease that has resulted in an increase of 1000 percent since 1978,” said director Andrew Rossi to Daily Buzz. “There is a student debt of over a trillion dollars.”

In the film, Rossi reveals the moment in history when the U.S. embraced a business model promoting property expansion over quality learning. ” I didn't go to film school. I went to law school and practiced as a lawyer for a couple years and made a career shift,” noted Ross. “That's the message of the film too. You don't have to be certified in the most traditional way. You don't have to be given permission.”