In 1955, Agnès Varda kickstarted the French New Wave with her debut feature La Pointe Courte, and for the next six decades she remained at the cutting edge of international cinema, continuing to innovate, experiment, and explore right up until her death earlier this year at age 90. An eternal free spirit, Varda used the camera as an extension of herself, synthesizing the things that captured her restless imagination—the worlds of outcasts and outsiders, the California counterculture and the feminist movement, beaches and heart-shaped potatoes—into a singular style that she called “cinécriture” (“cinematic writing”). Moving between narrative and documentary (and hybrids of the two), film and video, photography and installation works, she remained, at each step of her career, inimitably herself: playful, probing, empathetic, wise, and inexhaustibly curious about the world whirling around her. Film at Lincoln Center is honored to present a comprehensive, career-spanning retrospective of the luminous filmmaker’s vast canon.

Highlights include New Wave treasures Cléo from 5 to 7 and Le bonheur; Varda’s inquiries into those on society’s outskirts in Vagabond (NYFF23), The Gleaners and I (NYFF38), and the 2017 Oscar nominee Faces Places (NYFF55); nonfiction portraits of activism in Black Panthers and Women Reply: Our Bodies, Our Sex; and free screenings of the five-part miniseries Agnès Varda: From Here to There, which features Varda visiting filmmaker friends around the world including Carlos Reygadas, Alexander Sokurov, and Manoel de Oliveira. Varda’s daughter and producing partner, Rosalie Varda, will join audiences in person for select screenings.

Organized by Florence Almozini and Tyler Wilson in partnership with Janus Films.

Take home a piece of the retrospective at our merch store, featuring Varda totes, pins, and more! Also available at the EBM box office. The Beaches of Agnès

Introductions by Annette Insdorf on Dec. 29 and Rosalie Varda on Jan. 5

A poignant work of cinematic memoir, The Beaches of Agnès travels back through Varda’s remarkable life, and like water on the shore, encapsulates the ephemerality of time and memory. Introduction by Rosalie Varda on January 4

A carpenter tests the limits of his Edenic domestic bliss in Varda’s barbed masterpiece of infidelity, which exemplifies the filmmaker at her boldest. Cinévardaphoto is made up of three short films connected by the theme of photography, the medium that gave Varda her start and spurred the meditations on memory that would define her career. 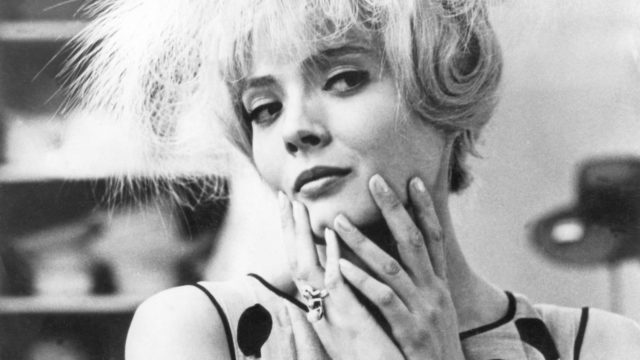 Both a spirited depiction of Paris in the ’60s and a substantive take on the female psyche, Cléo from 5 to 7 is one of the cornerstones of the French New Wave, enduring for its intelligent perspective on the strong, unpredictable emotions that arise when facing one’s mortality. Varda’s affable, curious portrait of her neighbors and acquaintances on Rue Daguerre, where she’d been living for decades, is at once one of her warmest movies and a slightly embittered reflection on “a woman’s creativity... smothered by the home.” This docufiction hybrid and self-described “emotion picture,” made during Varda’s second L.A. sojourn as a companion piece to the documentary Mur Murs, is a frank reflection on estrangement, loneliness, and loss. An NYFF19 selection. At age 88, Agnès Varda teamed up with the 33-year-old visual artist JR for this unassuming, Oscar-nominated masterpiece, a tour of rural France that celebrates artisanal production, workers’ solidarity, and the photographic arts in the face of mortality. An NYFF55 selection. The Gleaners and I

Varda’s wondrous reflection on the art of scavenging is a catalog of subjects candid, unsettling, touching, and sublime, gathered and arranged—as only Varda could—into a curious, coherent whole. An NYFF38 selection. The Gleaners and I: Two Years Later

Deeply humbled by the reception to her compassionate 2000 documentary The Gleaners and I, Varda returned to it two years later with this companion piece, in which she reconnects with several of the film’s subjects. 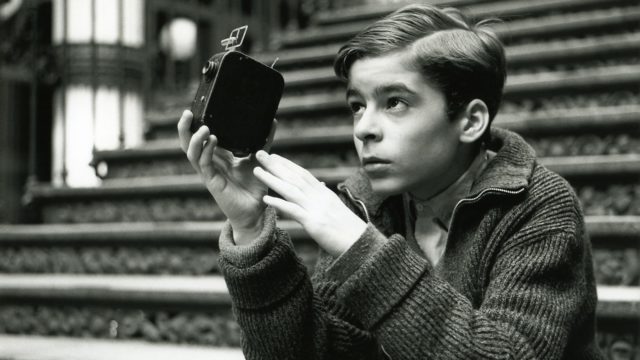 In Jacquot de Nantes, Varda recreates her husband Jacques Demy’s coming-of-age in the west of France, its events taken directly from Demy’s own childhood recollections, written down while he was growing weaker from AIDS-related illness. Varda casts Jane Birkin in everything from a heist thriller to re-creations of Renaissance portraiture in this complex, kaleidoscopic consideration of the actress as a woman, wife, mother, muse, and icon. Introduction by Rosalie Varda on January 6

Jane Birkin (who also conceived the story) gives one of her finest performances in Varda’s one-of-a-kind romance. She plays a 40-year-old divorcée who falls in love with her daughter’s 14-year-old classmate—an eyebrow-raising premise that’s treated with surprising tenderness. With the murals scattered throughout L.A., Varda found a quietly brilliant way to get an outsider’s perspective on the city’s convoluted social, racial, and economic tensions. An NYFF19 selection. One Hundred and One Nights

Q&A with Rosalie Varda on January 6

In this whimsical film historical revue, Varda assembles a troupe of beloved film icons to celebrate the hundredth anniversary of the Lumière Brothers’ earliest projections. One Sings, the Other Doesn’t

On January 4, screening with Varda's short Women Reply: Our Bodies, Our Sex and Q&A with Rosalie Varda

Varda’s feminist musical—with lyrics by the director—concerns the bond of sisterhood felt by Pomme (Valérie Mairesse) and Suzanne (Thérèse Liotard) throughout years of changes and fraught relationships with men. Opening Night of NYFF15. Varda was 25 when she shot her enormously influential debut feature, a marital drama set in a small coastal fishing village in Sète that many consider the first proper entry in what would become the Nouvelle Vague. Introduction by Rosalie Varda on January 5

The heroine of one of Varda’s most celebrated features, played in a career-high performance by Sandrine Bonnaire, is a strong-willed young woman for whom freedom is its own costly end. In her final work, partially constructed of onstage interviews and lectures, interspersed with a wealth of clips and archival footage, Agnès Varda guides us through her career, from her movies to her remarkable still photography to the delightful and creative installation work. An NYFF57 selection.

The World of Jacques Demy

Varda crafts a living memorial in The World of Jacques Demy: a nonlinear, kaleidoscopic celebration of her husband, a man of inexhaustible creativity who looked at the world with wonder. Twenty-five years after Jacques Demy’s The Young Girls of Rochefort, Varda convenes a one-of-a-kind reunion, in which the film’s cast and crew revisit the town they imbued with a dreamy second life. These three films from 1958 include Varda’s Along the Coast, a wryly existentialist riff on the travelogue; an impressionistic depiction of pregnancy, Diary of a Pregnant Woman; and a poetic, colorful chronicle of the castles of the Loire Valley, Ô saisons, ô châteaux. From her silent Keatonesque caper featured in Cléo from 5 to 7 to her 1968 open-air portrait of Oakland’s Black Panthers, this program showcases Varda’s inspired approaches to the short form throughout the ‘60s.

This program combines a selection of Varda’s empathetic, wise, playful, and restlessly curious short films made across three decades, starting with Women Reply: Our Bodies, Our Sex, Varda’s politically frank docu-short made two years before her feminist musical One Sings, the Other Doesn’t, and concluding with the Méliès-inspired romance Le lion volatil. This program combines four shorts selected and to be presented in person by Varda’s producer and daughter, Rosalie Varda, including Diary of a Pregnant Woman, Black Panthers, Uncle Yanco, and Women Reply, Our Bodies, Our Sex. 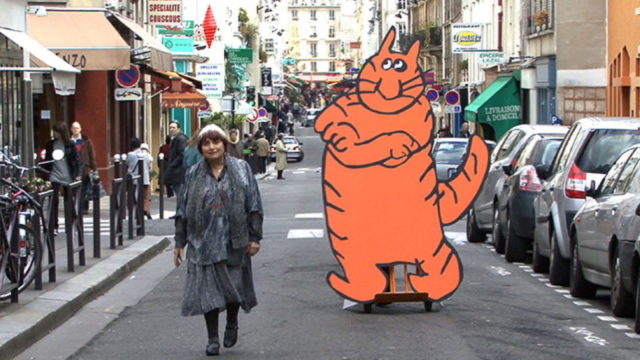 Agnès Varda: From Here to There

In this vibrant five-part miniseries, Varda travels around the globe for a freewheeling assemblage of people, places, art, and happenings. Each of these deceptively off-the-cuff encounters speaks to Varda’s keen fascination with life’s surprises, questions, and possibilities. Free and open to the public! · Presented by HBO

To celebrate the final weekend of our Varda retrospective, we present a conversation with another generation of filmmakers about what Varda has meant to them and the key movies from her oeuvre that influenced them. During our Agnès Varda retrospective, taking place December 20-January 6, stop by the Elinor Bunin Munroe Film Center Amphitheater for a free loop of our Agnès Varda Q&As throughout the last decade. The career-spanning conversations touch on her work in narrative… All-Access Package – See everything in the series for $150!

Note: Varda by Agnès is not included in discount packages. Film at Lincoln Center Members at eligible levels can redeem their complimentary ticket vouchers for this series in person at the box office. Patrons can reserve in advance by emailing [email protected].