Over the past 15 years, Pietro Marcello has been quietly redefining contemporary Italian cinema. From exploring economic changes in Italy in his first documentary, Crossing the Line, to his latest adaption of Jack London’s novel, Martin Eden, Marcello never fails to beautifully blend the boundaries of narrative and documentary. Marcello’s evolution as a filmmaker is considered “one of the most significant artistic flowerings in contemporary cinema (Cinema Scope, Blake Williams).” Film at Lincoln Center’s latest retrospective is the perfect opportunity to discover why Academy Award-winning director Bong Joon Ho named Marcello one of the “directors who are pivotal to the future of cinema.” A seemingly simple documentary abounding in sensual images and phenomenological ideas, Marcello’s first nonfiction feature traces the Italian landscape through the windows of a succession of long-distance express trains, moving from the South to the North and back again. Day and night, landscapes and faces, voices and bodies commingle to yield—even in the ephemeral glimpse offered by a passing train—a rich, variegated, and utterly transfixing portrait of modern Italy as a multiplicity of lives, impressions, old customs, and new cultural tensions.

“A film of landscapes and faces, a portrait of a country and an economic system (many of the passengers are laborers seeking work), it views the railways as a symbol of both predestination and freedom.” – The New York Times, Dennis Lim

“Long before Martin Eden, Marcello’s documentaries manifest that anachronism that makes his cinema so singular and entrancing.” – MUBI, Leonardo Goi 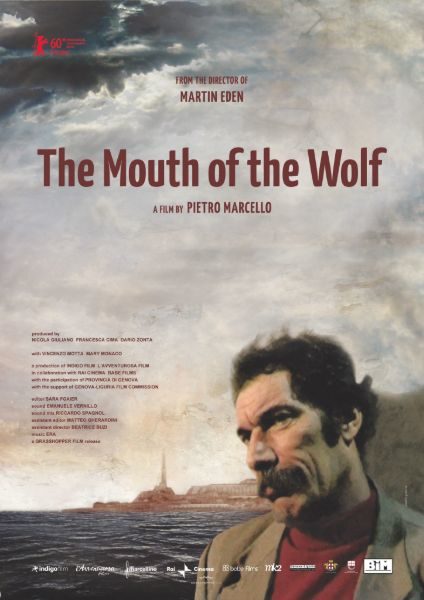 Marcello’s haunting documentary is a sui generis love story, following the 20-year relationship between a Sicilian heavy named Vincenzo and a trans convict named Mary after their meet-cute in prison. When she gets out, Mary pledges to wait for Vincenzo on the outside, though things become more complicated as she finds herself grappling with heroin addiction. But Marcello isn’t merely content to render their romance in all its love and complexity: The Mouth of the Wolf is also a lyrical, sensuous, and melancholy tribute to the port city of Genoa, capturing its singular aura and its intoxicating air of eternity.

“One of the rawest, vulgar, and absolutely poignant portraits of love ever presented in documentary. The mouth of this wolf bites and wounds but it also speaks with deep eloquence of the strength and resilience of the spirit.”— Museum of the Moving Image, Donal Mosher A unique tribute to the Armenian filmmaker Artavazd Pelešjan, Marcello juxtaposes excerpts from Pelešjan’s work—marked by the director’s signature approach to montage, a dynamic, rhythmically complex blend of original and archival footage inspired by the theories of Dziga Vertov—with stark black-and-white footage of Pelešjan in latter-day Moscow, leading a life of silence and seclusion. The result is a striking, heterogeneous portrait of a neglected genius, an iconoclast whose radical reimagining of cinematic form finds new expression through Marcello’s similarly radical documentary.

“Marcello has created a unique and lyrical portrait of the brilliant Armenian filmmaker Artavazd Peleshian.” – Museum of the Moving Image Shot on expired 16mm film stock and freely incorporating archival footage and folkloric tropes, Marcello’s beautiful and beguiling film begins as a portrait of the shepherd Tommaso, a local hero in the Campania region of southern Italy, who has volunteered to look after the abandoned Bourbon palace of Carditello despite the state’s apathy and threats from the Mafia. When Tommaso suffers a fatal heart attack during the film’s shooting, Marcello boldly grants his subject’s dying wish: for a Pulcinella straight out of the commedia dell’arte to rescue a buffalo calf from the palace. A documentary that soars into the realm of myth, Lost and Beautiful is an enormously moving work of political cine-poetry.

“Lost and Beautiful, which some critics have connected to the lineages of both Pasolini’s neorealism and Italian painting, finds cinematic force in its fanciful telling.” – Film Comment, Nicolas Rapold Marcello’s most straightforwardly fictional feature to date, Martin Eden is set in a provocatively unspecified moment in Italy’s history though adapted from a 1909 novel by American author Jack London. Martin (played by the marvelously committed Luca Marinelli) is a dissatisfied prole with artistic aspirations who hopes that his dreams of becoming a writer will help him rise above his station and marry a wealthy young university student (Jessica Cressy); the twinned dissatisfactions of working-class toil and bourgeois success lead to political reawakening and destructive anxiety. Martin Eden is an enveloping, superbly mounted bildungsroman.

“One of the most epic-feeling Italian movies in years, a throwback to ’70s-era big-canvas statements. Lead actor Luca Marinelli, rousing in every scene, comes within hailing distance of the young Robert De Niro.” – Time Out New York, Joshua Rothkopf

“One of 2020’s most beautiful films…. richly textured and of this moment in history, Marcello’s film is an opulent work of social commentary in the body of a classically Italian genre.” – Criterion Cast, Joshua Brunsting

Finding Poetry in Couple’s Pain – The New York Times (2011), by Dennis Lim, Director of Programming for Film at Lincoln Center and the New York Film Festival

In Conversation: Pietro Marcello with Dan Sullivan – The Brooklyn Rail (2020), by Dan Sullivan, Assistant Programmer for Film at Lincoln Center

Watch the films of Pietro Marcello in the Film at Lincoln Center Virtual Cinema.